The Kinera SEED can be purchased currently at:

AliExpress: https://www.aliexpress.com/item/Official-KINERA-SEED-In-ears-monitor-1BA-1DD-earphone/32857815833.html
The Kinera SEED is a move “upscale” by Kinera. After the highly successful BD005, and the bipolar feelings of the H3 (to some), Kinera sought to make a statement. And in the name itself, they are. By planting a SEED into their lineup, Kinera state that this model will in fact change over time. Tuning as they see fit, the SEED represents another direction for the company who is fairly well known in the Asian market, but less so in the US. With the introduction of this production run SEED, Kinera sees the culmination of close to two years. And after my initial listen, I approve.

An excellent fit, a fairly unique and sexy shape highlight this iteration of the SEED. Having roughly 10 listening hours (now close to 25hrs), and about 25 total hours (roughly 50hrs now) so far, I can state that this is well above the H3 and worthy of Kinera’s effort. The company has even very recently changed cable providers, due to an error not of their own making. Not only that, all purchasers will receive a new cable without question, and without charge. Excellent service from Kinera to say the least!

Joe Satriani- In My Pocket, Cherry Blossoms,
The Dave Brubeck Quartet- Blue Rondo a la Turk, Take Five
10,000 Maniacs-These Are Days, and others

Joe Satriani’s In My Pocket through the Shanling M5, just rocks. Rich, full, decent detail, and an overall fun sound.

On Cherry Blossoms, the overall signature short of vocals can be pretty much defined. Running the SEED through the iBasso PB3/Opus#2, there is a good overall tone, fairly well defined, hearing distinctly the pluck of the orchestral part combining well with Mr. Satriani’s guitar. An almost deep rumbly bass is had, showing the limitation of bass here in my mind. And that is with the 64Audio foam tips. Not bad mind you, just not as much as I would have liked. That said, when the piano accompaniment comes on, there is a good feel, a good solid support there. With good height, but not as much width as I would like, the soundstage is decent enough to pacify most. Nearing the end of the song, there is a bit of “discombobulation,” but it could also be the complexity presented through the song. In more open parts, there is none of what I just stated, presenting a very pleasant sound. There is also a bit of distortion wrought through the song, purposely in the recording, so take that as you may. Presenting a good front, the latest SEED tuning is quite pleasant, and can certainly rock.

Using Dave Brubeck’s seminal Take Five, the sax sounds close and sensuous. This is almost front row/on stage emphasis and here is where that push (to me) of those mids up front helps. With the cymbal/snare support off to the left, the sax solo is just where it should be…at the front and sounding strong. This is not clarity of say something costing several times more, but there is certainly enough engagement to hold one’s attention. A definite step up from the H3.

Shanling M3S…generally too bright in the mids for me. On a VERY windy walk yesterday though, I appreciate that extra push. Again, using the foam tips isolation was well above average, and only on the quieter aspects of whatever song was playing could I hear the push of wind against the SEED. As a result, I am very happy with the isolation wrought by switching to the foams.

Bass overall is just that bit too shy. There are hints of it present, kind of like anticipation. You are almost there, then another sign pops up stating your destination is 30 miles away still, then again. Not an unpleasant bass though, just not enough.

Mids are slightly forward to me, but not when compared to my 64Audio U8. Those have quite the expansive mids, opening up wide to encompass the sound. With the SEED, the mids sit compactly, but still a bit forward on some songs.

Treble (not a good judge, I am) is tamed compared to the H3, and that is probably a good thing. I would classify it as having a bit sparkle, and brightness, but not as much as it could have…this is evident on the live version of Take Five, as the cymbal support is just about right. What a song.

Soundstage to me seems rather tall, but not as wide as I would have expected. I get the feeling of a tall open space with good sound characteristics. And while there is good layering, it is about par for this level of cost/performance. Decent and well presented. Overall so far, this is a good decent presentation in both sound qualities and aesthetics.

I do like the lima-bean shape of the earpiece, even though I HATE Lima Beans…fairly unique and well presented, but on one of the pieces, the two halves do not fit as well as I would hope, and I can see some of the epoxy, which was not polished off completely. The fit of the two halves together is good, but finish is a bit below par. Countering that, there is no problem with how the very nice cable fits and stays. The cable covering at the pin insertion place adds quite nicely to the overall look of the IEM, and it not only protects the cable, but aids ingress/egress from one’s ear. Plus, it adds to the look in my book. Very well done.

For more detail, my full review should be up in about a week. 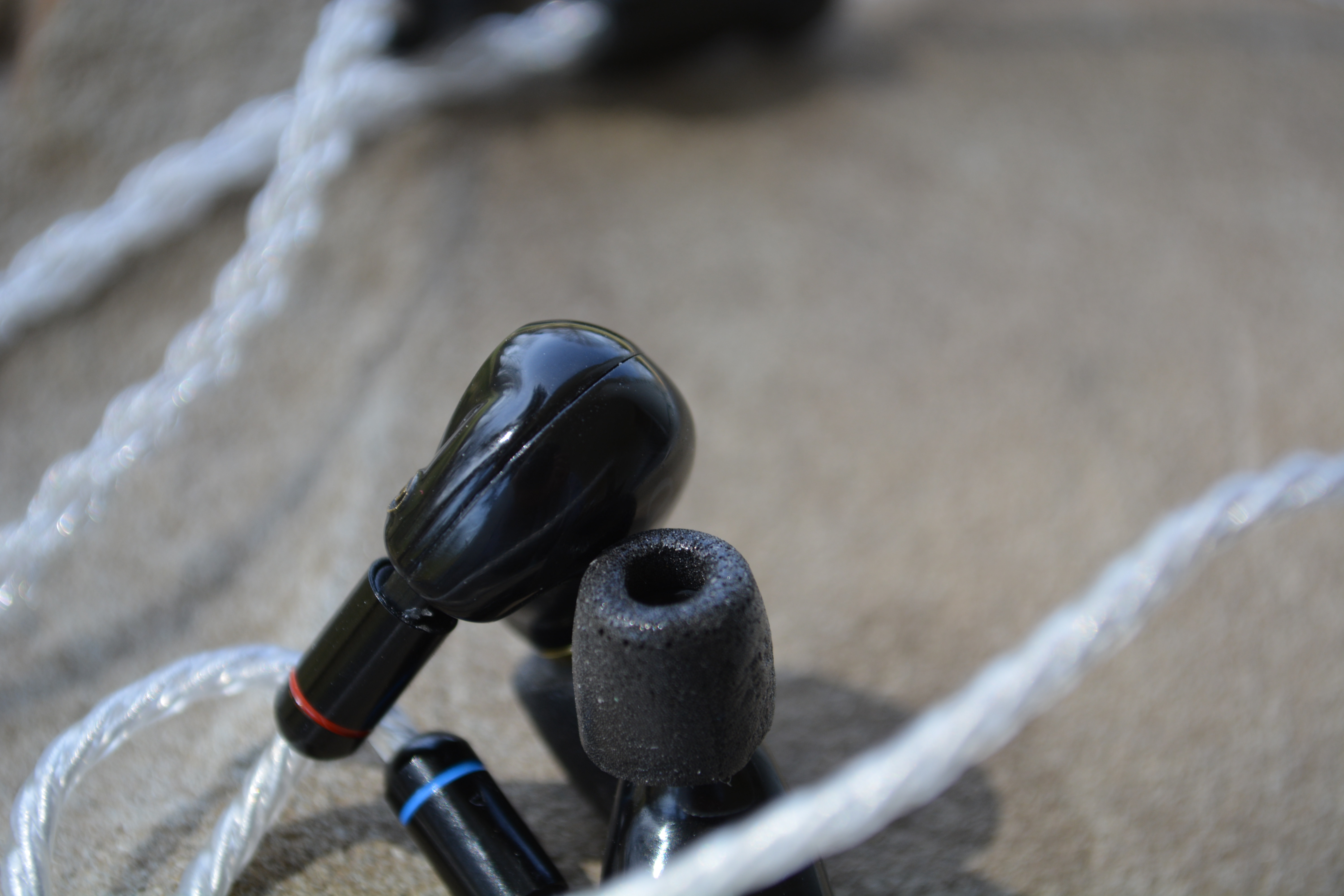 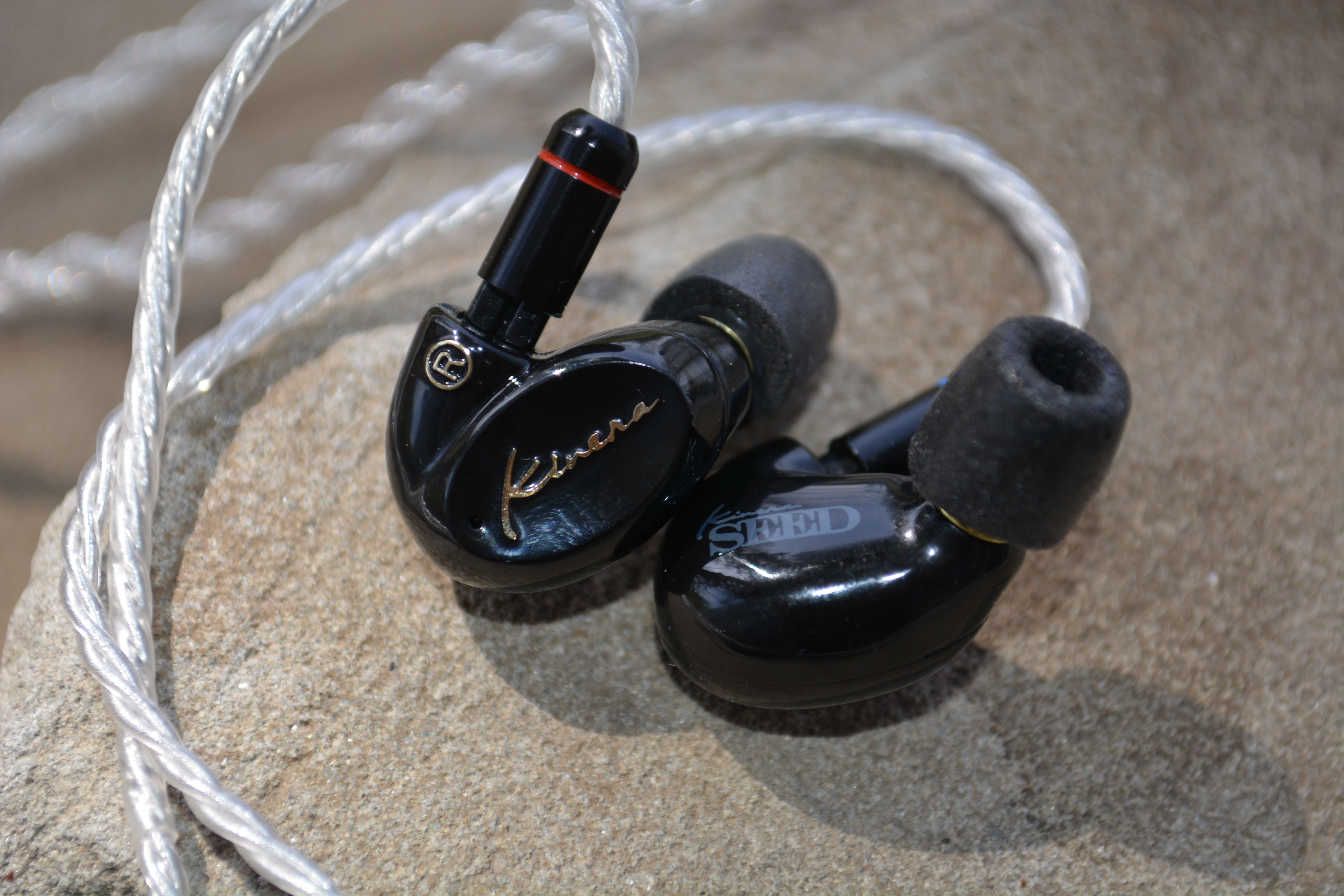